Home News You Can Use Dividing Lines: Sophiya Hazarika’s story

Nations created, nations divided at the whims and fancies of a few. I still remember a lesson from my English book back in school, which touched me deep. It was about this little boy living in the border town near the Alsace – Lorraine region of France who realizes, a little to late, that he has no time left to learn his beloved mother tongue, French, as his town would very soon be annexed by Germany (as part of the post – war agreement). That particular day was his last day in school and his French teacher tells the class that from the next day onwards there would be no more French classes as his German counterpart would take over. His feelings at that particular time, of remorse at having neglected his mother tongue were intense. History is replete with such instances where homes, families and friends have been torn apart by a mere stroke of the pen. 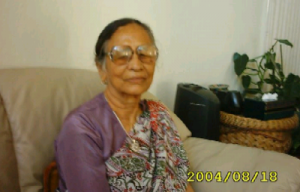 This sheer pain of being separated from ones motherland, from near and dear ones and that distance actually makes the heart go fonder was evident in my chance meeting with a remarkable lady in the US a few years ago- Sophiya Hazarika, a seventy plus hailing originally from the upper Assam town of Dibrugarh.During our stay at Sunnyvale ( in the Bay area, San Francisco, California) “aunty” as she is more fondly called, was a regular visitor at my sister in law’s. Be it a birthday party, a barbeque,  a baby shower or a graduation ceremony, she would  invariably be there in any Assamese get together attired usually in a  Mekhela-Chadar. It was quite evident that she was a much wanted and respected senior around.It was only after a few meetings with her that I began to ponder about the unique twists and turns in her life. What was obvious throughout these meetings was her great attachments her place of birth – Assam.

Born in Dibrugarh, her mother passed away when she was barely three months old. Brought up by her maternal grand mother in Nagaon, she got married  very early. Her husband, Abdul Qayum Hazarika, also from Nagaon was a Captain in the army, when they tied the nuptials. Post marriage he was posted at Calcutta while she stayed on in Nagaon with her in- laws. Soon after, India was partitioned followed by the infamous Calcutta riots. The air around was tense and the ugly head of communal tension at its peak. The British army officers influenced Abdul Hazarika to opt for East Pakistan (as Bangladesh was then known) for better career enhancement by saying being a Muslim in the India army he would be discriminated against.This decision of her husband continues to disturb her till today. Being so young and moreover away from him at that particular point of time, she did not have much of a chance of dissuading her husband from taking such a step. She says that she was too young to also realize that this partition and their decision go to East Pakistan would have a life long implication – that she could not meet her close ones and that her dear Assam would not be easily accessible to her. Probably the physical proximity between the two – Assam and East Pakistan was one factor which misjudged both -they thought they could keep coming whenever they wanted to, which was actually not to be. To their utter dismay, relationship between the two nations only worsened with time. Their attempts to come to India, even for a visit proved immensely difficult.Through out her husband’s army career they were posted at Dhaka, Karachi and Rawalpindi and eventually after the creation of Bangladesh, destiny took them even further away from Assam– to Pakistan, where they were posted at Karachi. Her son Asif was born in Karachi. He completed his BE from Karachi Engineering College and in 1979 he came to do Computer Engineering in the Oregon university in the US where he decided to stay back.

After all these years in Pakistan in 1988 they decided to join their son in the US. Soon followed an American citizenship. But this was only after repeatedly trying for an Indian citizenship, which eluded them. Memories of Assam kept haunting them in Pakistan but in view of the complications in the Indo-Pak relationship, they were told that getting an Indian citizenship would involve a long time. Her husband’s army back ground made things more complicated.Her husband’s ill health and his subsequent demise after a couple of years closed this chapter from her life forever. Her dreams of eventually coming back to her land of birth remained just a dream……. I could still today see the pain in her eyes.

But aunty is a true global citizen.She enjoyed her stay at Pakistan and said  that it was a much more liberal society than  it is now. On her husband’s insistence she  took up a job in an American Insurance Company. She also worked for Radio Pakistan.The amiable person that she is, she made a lot of friends. She admits that she was friendlier with the Bengali crowd there probably due to the physical and cultural proximity of the two cultures – Assam and Bengal. Musically inclined, she  sang classical, Rabindra Sangeet and Nazrul Geeti ( after the Bengali rebel poet Nazrul Islam). Because her Urdu was not fluent she preferred to sing Bengali songs in Radio Pakistan. She joined the Nazrul Academy in Karachi where her late husband was the Honorary Secretary and was given an award in recognition of her long and dedicated service to the Academy.She is thankful to the Mission School, Nagaon for giving her a very progressive and modern outlook during whatever little time she went to school. Hence, she is as comfortable celebrating Id as she is in participating in a Puja at someone’s place. The growing religious intolerance saddens her, more so, as she grew up in a land where religion did not divide man from man.

Today, she keeps herself busy looking after her close-knit family consisting of her son, daughter-in-law and her two grand sons. Her son Asif is currently employed with a Japanese firm. Daughter-in-law, Durdana, a school teacher belongs to Karachi (her family hails from Allahabad and moved to Pakistan during partition). She has two grand sons – Danial and Danish. The elder of the two has joined the San Deigo University and the younger one is in grade eleven. She is a dedicated grandmother and enjoys spending time with her grand sons.

Aunty enjoys cooking and reminisces that in 63 she had sent a recipe to Femina from Pakistan and her joy knew no bounds when it got published along with a photograph of hers. What she loves and relishes however is the typically Assamese dishes – Khar, Tenga, Pitika and simple Dail-Bhat. Sadly no one in her family enjoys it – they find it too bland. So she has no company to enjoy this. Nostalgic about the pitha she had for breakfast in Nagaon , she says that even in Pakistan she invited people over for Assamese cuisines.She still cooks and is still into learning music. Age has not been a deterrent for her and she goes to a classical music school in the US. Earlier she used to sing Bihu songs in social gatherings. This love for music, she has passed on to her son and also her grand sons. Asif plays the guitar and the piano and her grand son plays the guitar.

When asked about how frequently she went to India and more specifically, Assam, she says that for her the best part about getting a US citizenship is the fact that she gets to visit Assam as frequently as she likes. As a Pakistani citizen, even to apply for a visa took a long time and this was more so as her husband was in the army. She sadly recollects that the first time she visited Assam after she moved out was in 1976 to visit her ailing mother-in-law. Her husband could not be there even when his mother passed away. She laments that even during her son’s marriage in Karachi no one from Assam could come over due to visa problems.For her visiting Assam is an indescribable feeling. She has a lot of relatives who come to visit her. She also visits Nagaon where her in-laws are and Dibrugarh where her late brother’s family is based. She catches up with all the family happenings and time simply flies by.In the near “pedestrian empty” streets of Sunnyvale, on an early Sunday morning, you will invariably come across a lone  figure walking past, that of Sophiya Hazarika going for her routine rounds of social visits…..