Reviewing the Impact of Conflict on Women in Assam and Nagaland

Former Home Secretary Gopal Pillai launched a three-day programme of the Centre for North East Studies and Policy Research (C-nes) in New Delhi on September 7, 2011, saying that it was crucial for governments and non-government groups to reach out to groups and communities in the North-east which felt distanced and alienated. 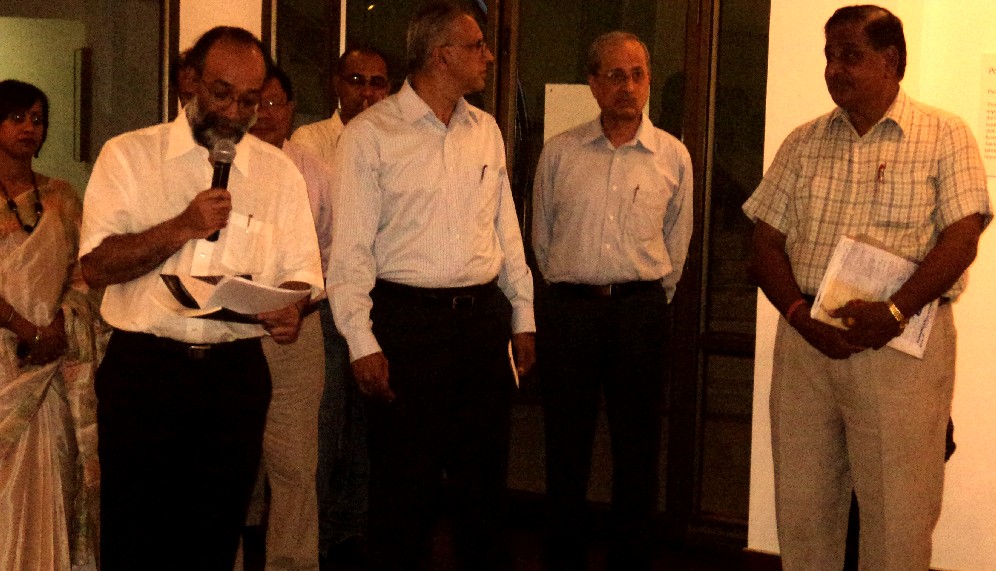 Mr. Pillai, who released the report, ‘Bearing Witness: the impact of conflict on women in Nagaland and Assam,’ based on research by C-nes teams in the two states, said that he had been moved by the accounts in the reports of the reality of the pain and trauma that women especially had suffered over decades. 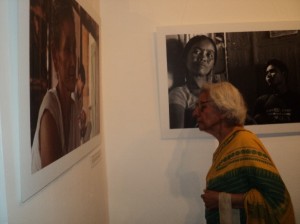 takig a close look at the photographs of the project

Releasing the report, he referred to one where a woman talks of how she had to accept reality and move out of her grief and bitterness despite seeing the killers of relatives roaming around freely.

Mr. Pillai, who was one of the country’s most respected officials, spoke of his experiences of traveling in the different states both as Joint Secretary in charge of the region in the Ministry of Home Affairs and then more recently as Home Secretary where he tried to assuage hurts and grievances by holding dialogues with local communities at the village and district level, apart from frank discussions with government officxials and political leaders. 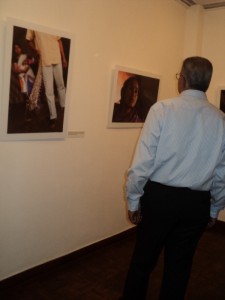 the former Home Secretary looks at photos from the exhibition

He recalled the case of Oinam village in Manipur, which had been the site of a major attack first by a Naga underground group on an Assam Rifles post and then a counter-attack by the paramilitary forces in which several villagers were killed, many houses torched.  The case became a major one and went up to the Supreme Court.  “I apologized to the people, on my behalf and on behalf of the Government of India for what had happened,” he stated, a rare admission of the responsibility of the State for such events.

Sanjoy Hazarika, Managing Trustee of C-nes, who was co-author and project director, delivered opening remarks, spoke of the project and how it had taken shape.  He paid tribute to the hard work of the research teams of Charles Chasie, Dr. Lungshang Zeliang and Dr. Buno Ligase in Nagalad as well as Mirza Zulfikar Rehman and Riturekha Baruah of Assam and their networks that enabled such a powerful document to emerge. 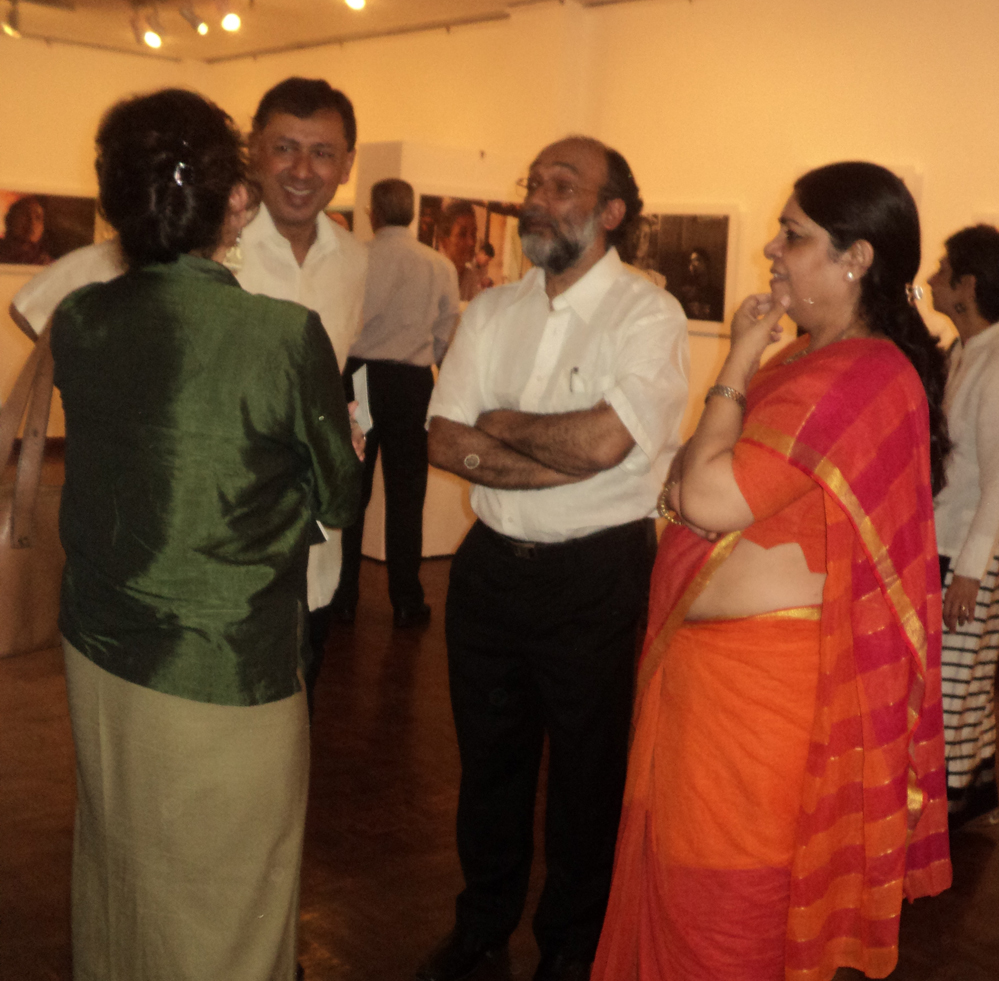 ‘Bearing witness,’ Mr. Hazarika said, was ‘extremely challenging and difficult’ especially since team members had to both be tellers of stories, sensitively listen to them and share the trauma of victims of violence. The Project Report was edited by Ms. Preeti Gill, an editor of Zubaan, the feminist publishing house who has long been associated with C-nes and was also a associate director of the Conflict project.

Senior figures from government, media, scholars, non-government groups as well as diplomats and representatives of international organizations took part in the inaugural, which was held at the India International Centre Annexe where Kausiki Sarma’s graphic photographs of the project and women victims was also opened by Mr. Pillai. The project was funded by the Heinrich Boll Foundation of Germany and the IIC was also a partner.

The next day saw a good audience watch the premiere of the documentary, ‘A Measure of Impnity,’ directed by Maulee Senapati and produced and scripted by Sanjoy Hazarika. The 50-minute film spans the range of complex conflicts in the region but focuses on Nagaland and Assam and the living trauma of women victims.  Questions flowed from the audience afterward and the director and producer responded to numerous points.

The final event was a surcharged evening of discussions led by a panel comprising of the respected scholar Prof. Udayon Misra, Dr. P. Ngully, psychiatrist from Nagaland, Ms. Meenakshi Ganguly, representative of Human Rights Watch, Ms. Monalisa Chankija, editor of the Nagaland Page, Mr. Mirza Rahman, researcher for the Assam segment of the project, and Mr. Hazarika. The discussion was chaired by Ms. Gill, who spoke of how her understanding of issues and people had grown over the years through travel there and extensive meetings and conversations with a wide range of individuals and groups. 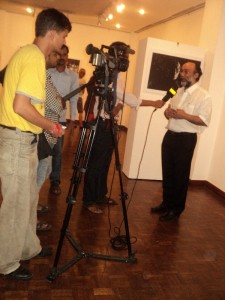 Ms. Ganguly said that the “human debris” of conflict – largely women and children – were often forgotten and the Report highlighted the importance of understanding this problem.  Dr. Ngully spoke of how the tragedies borne by one generation were onpassed to the next generation, leading to complex challenges of PTSD (Post Trauma Stress Disorder).

Prof. Misra also asserted the need to go beyond discussions centred around the NER, expanding these with a comparative focus that could bring greater knowledge about the issues and difficulties of the region and its people to a wider audience across the country.

Closing the three-day event, Mr. Hazarika spoke of how the issues raised in the report and the interactions could be developed in the National Steering Committee on Health of which he was a member; it would be important to include these issues through a prescriptive framework into a policy structure involving the stakeholders.

In addition, he said that the work of the issues must continue by reaching a wider audience across the country but also focusing on other areas of conflict in the North-east and comparing it with other parts which had also suffered in India and elsewhere. “As long as there are untold stories, our work will not be complete — the democratic deficit in the region must constantly be challenged.”